Hill of Stake is the highest point in the Renfrewshire hills and a Marilyn. Despite its low height, I had failed to reach the top on two previous visits- it is rough, featureless country, the mist was down, and their didn't seem much point in carrying on beyond the end of the track on to the moor. However, today was different, the hill was clear and the ground frozen so I reckoned that it would be reatively dry underfoot.

I started from the Muirshiel Regional Park visitor centre beyond Lochwinnoch. The first couple of miles are along a track as far as an old barytes mine. The mine was apparently worked for over 200 years beginning in the mid-18th century. It closed in 1969 and although the buildings have now been demolished, some rocky gullies formed by open cast mining operations can still be seen.

After passing the mine, it was completely trackless across rough moorland with a few peat hags thrown in for good measure. Good walking country....not! 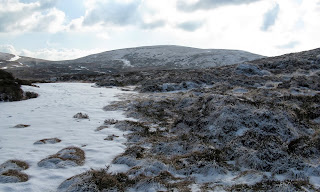 After a bit the hill came into view- an incentive to keep going. There is a trig at the summit and reasonable views. Looking north..... 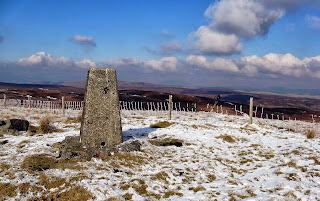 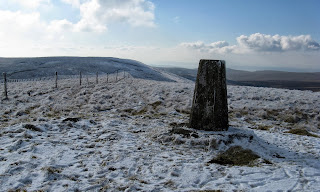 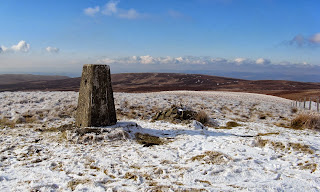 Despite the rough ground, I rather enjoyed this one. It was a good half day's walk with some historical interest. 8 miles, 280m of ascent, 3 hours and 50 minutes.
Posted by Neil at Friday, March 19, 2010