Cairn Hill is a western outlier of the Lowther Hills in southern Scotland. I drove down the M74, turned off at Abington for Leadhills and Wanlockhead and then joined the A76. A few miles further on there is a narrow side road that goes to Cashogle farm; I took this and parked at road end at the start of a track that goes to the ruined Kirkbride church and graveyard. This is the way that I approached the hill. 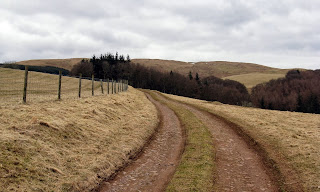 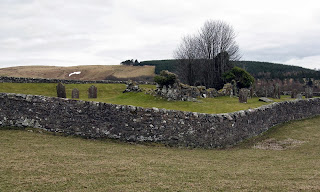 All that I can find out about the church is that it was probably built early in the 16th century. There are only a few of the old gravestones left standing in the graveyard.

Past the church, the route crossed a field and then went through a small wood. There was a sort of firebreak but the trees did encroach a bit but I was soon through it and out on to the open hill. It was an easy walk over gently angled slopes to the summit which was at a junction of fences and gates. And, yes, there was a cairn! The best of the view was to the main Lowther hills..... 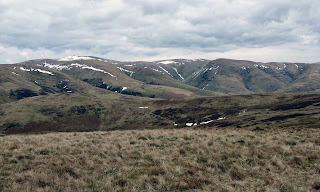