10 February 2010. It was another beautiful day so back out again! Binnean nan Gobhar was not a hill that I had really thought about doing- I had read a few reports about it and they all said that the ground was extremely rough and boggy. But the frost had set in for weeks now so I reckoned that if ever there was a good time to climb the hill then it was now.


Binnean na Gobhar (goat peak) is a Marilyn on the east side of Loch Lomond. I parked at Cashel where there is lots of space and some way marked walks, one of which meandered up the hillside to about the 300 metre contour. So that was an easy start; maybe this would not be as bad as I feared? 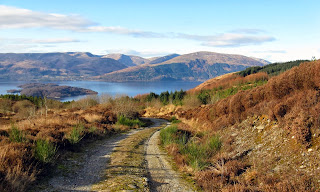 There were good views back to Loch Lomond and the Luss hills. And this is my first view of the hill..... 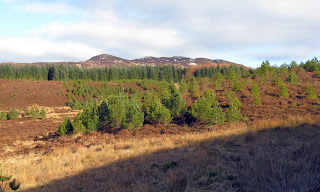 The track continued beyond the end of the marked path and a viewpoint and entered a small wood. I could clearly see my objective from here..... 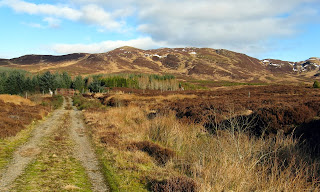 The track ended at a gate and the rough stuff took over. Heather, tufted grass and bog- fortunately mostly frozen- was my lot after that but at least I could see the hill ahead of me. I aimed for a grassy gully that avoided the worst of the heather and climbed to the top of a knoll with a cairn on it.
Oops, it was not the summit! There was another knoll a few hundred yards further on that also had a cairn on it and which seemed to be higher. 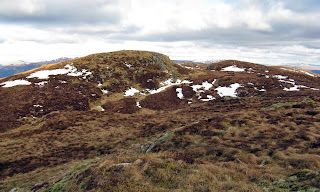 So I descended the first knoll and crossed over more rough ground. But there was a fine view of Ben Lomond to compensate. 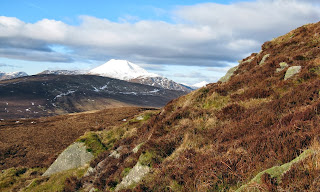 This time it was the summit so I got out my flask and chocolate. I needed a rest before tackling the grass and heather again. On the way back, there was a good view of Loch Lomond and the islands.
All in all, this hill was no worse than many I have been on. The frosted ground certainly helped and winter may well be the best season to be here. The walk is about 8 miles with 600m of ascent and took me 4 hours and 15 minutes.
Posted by Neil at Friday, March 19, 2010