Hightown Hill and Wauk Hill, 2 from the M74

Driving to and from MBA meetings in the north of England has provided me with the opportunity to climb several sub-2k Marilyns near to the M74. These two small hills are in rural Dumfriesshire and are ideal for a stop to stretch the legs; they are pleasant wee hills but not ones that you would make a specific trip to climb. I climbed both of these in 2009. 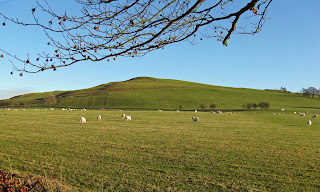 I headed off the motorway to Lochmaben and then along various narrow roads which eventually brought me to the west side of Hightown Hill, which I reckoned would provide the easiest approach. I managed to get the car on to the verge a few hundred yards south of Hightown farm and walked back down the road to opposite the farm to a track which led to the open hillside. From there it was just a short climb up grassy slopes to the trig. For a low lying hill the views were excellent, the first two pics are looking west towards Galloway and the last one is the view south-west to the Solway and Criffel..... 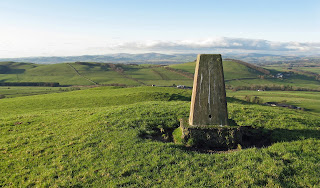 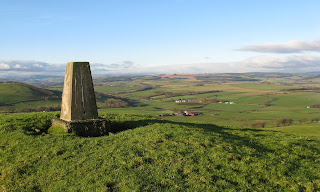 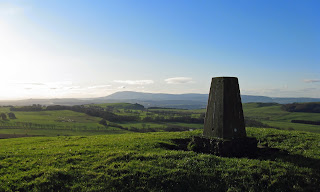 This hill took less than 1 hour up and down including a laze at the trig.

Wauk Hill needed a bit more driving to reach it as it is situated south -west of Thornhill. I was returning home from a trip south so headed for Dumfries and then took the road to Moniaive. I decided to approach the hill from the A702, approx 824913. Parking spots here were a problem, there were none! The road to Tynron looked to be very quiet so I took a chance, drove down it for a few hundred yards and got as much of the car on to the verge as possible.

I had to get through a field to get to the hill. I had a choice of two fields, one contained sheep and the other a herd of frisky bullocks. A no brainer! The bullocks accompanied me all the way up the field, fortunately on the other side of a wall. I haven't included them in this pic as I wanted to avoid their attention as much as possible..... 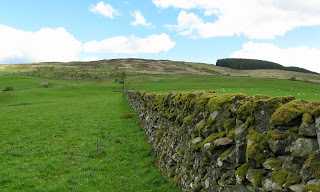 Beyond the field, the ground was uncultivated but there was a semblence of a path in places through the short heather. This one was another good viewpoint. This is towards the Galloway hills..... 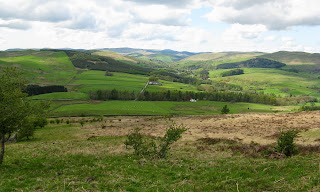 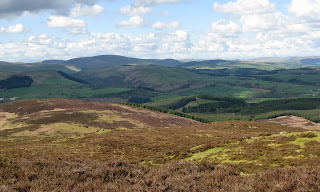 and east to Queensberry..... 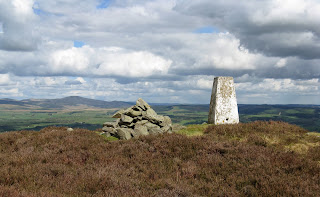 I suspect that I didn't find the best starting point for this hill but it was an impulse walk and it was just a case of finding a reasonable way up.

I like these smaller hills as they take you into parts of Scotland you wouldn't normally go. Lets here it for the pimples!
And they get better weather too.