I keep meaning to visit more islands although to be fair, the poor weather this year has provided a decent excuse for failure. Islands need good weather to be appreciated properly and 2011 has not been good. However there is a wee island in the Firth of Clyde only 30-odd miles from home that always satisfies the craving for another few months- Great Cumbrae or Greater Cumbrae as the local tourist association says that it should be called. The 10 minute ferry trip from Largs transports you to another world- at least outwith the main tourist season! There are lots of walks to do and things to see so as well as the pictures that I took today, I have added a few more to give a better flavour of the Island. 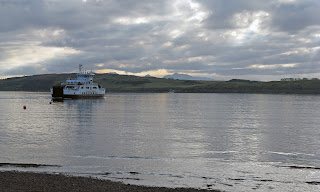 was having some work done to it and the route was being operated by one of CalMac's older vessels- the Isle of Cumbrae- here at Cumbrae slip looking back to Largs..... 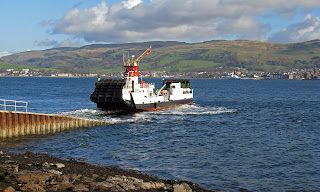 We decided to visit the highest point of the island- Barbay Hill and the Glaidstone. This was a different sort of hill walk for Ben, the island is mostly farm land and the walk is on ordinary roads, although there is very little traffic. For some reason, the furry one was in a very excited state today and the least said about his behaviour the better. Let's leave it that his hearing seems to be a bit selective on occasions! However, he did settle down eventually and was quite calm on his first ride on a bus on the journey back to the pier.

Sitting slap bang in the middle of the Clyde estuary, Barbay Hill is a good viewpoint, despite its lack of height. There was a bit of a haze today so the mountains of the southern highlands were not as clear as I had seen them on previous visits and the Arran hills retained a cap of cloud all day. But the nearer views were excellent and for the first day of November it was not at all bad..... 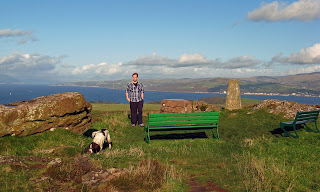 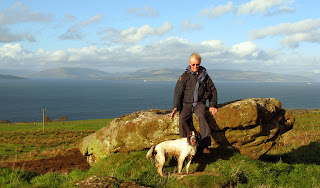 After the summit, we carried on along the road and dropped down to Millport, the "capital" of the island. Most of the shops were shut; it was lunch time. We also had a bit to wait for the bus as the ferry takes a break in the early afternoon but it was actually very pleasant sitting in the bus shelter at the pier enjoying a bit of sunshine. I took a couple of photos of the harbour and the town..... 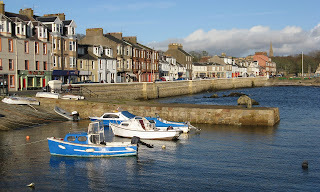 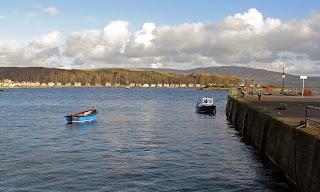 A "main" road, about 10 miles long,  runs right round the island hugging the shore. I have walked it a few times and also cycled round. The west side of the island is more rugged than the east and there are glimpses of  Goat Fell and the other high hills on Arran, with the southern tip of Bute in between..... 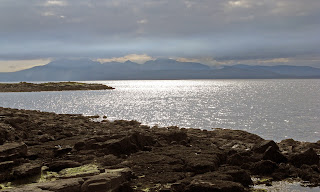 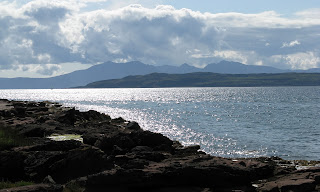 This is an island that I am sure that I will continue going back to again and again.
Posted by Neil at Wednesday, November 02, 2011