After the effort of Beinn Talaidh, I was looking for a short easy day, and, if possible, a Marilyn that was new for me. 'S Airde Beinn seemed to be an unusual hill so I drove down to Tobermory and took the B8073 road that goes to Dervaig. There was good parking space at the end of the forest on the west side of Loch Peallach; the path to the hill started at the side of a derilict cotage. This is the first view of the hill..... 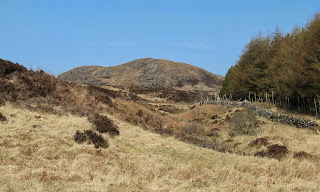 'S Airde Beinn is an unusual hill because it is a volcanic plug which contains a "crater"- a glacial depression filled with water. So on reaching the top of the slope in the picture above, instead of a plateau I found that there was a deep depression containing a loch. The first picture below shows the view of the loch looking north and the second picture the view looking south. 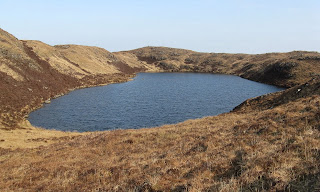 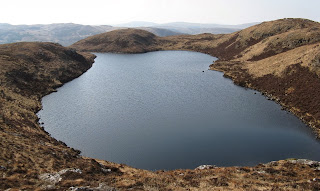 The SNH website provides some fascinating information. "S'Airde Beinn represents the remnants of what was once the vent or central core of a volcano. This volcano was erupting lava during the Tertiary geological period around 60 million years ago, when Mull was a major volcanic centre. Molten rock progressively built up in a reservoir and then fed the erupting volcano. The erupting lava cooled rapidly on contact with the atmosphere forming a very fine grained basalt. At some stage, volcanic activity ceased and the molten rock remaining in the feeder pipe was trapped and therefore unable to reach the surface. It then cooled slowly in the chamber to form a course grained dolerite plug.

"Differential erosion of the ancient volcanic environment during the last ice age has resulted in the more resistant plug forming a positive topographic feature. This represents the largest example of a Tertiary volcanic plug in western Scotland."

The summit cairn was at the north end of the "crater rim"; unfortunately it was a hazy day so the distant views were not very extensive. But an interesting and unusual hill and it gave me the short day I was looking for- 2 miles, 190m of ascent taking just under 2 hours. 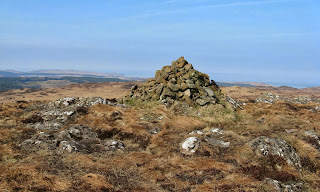