Tappoch, a Broch and a Castle


I was looking at the list of Tumps on the hill bagging website last night when this one caught my eye. Not because of its name- I had never heard of it before- or because it was supposed to be a good viewpoint- it was covered in trees- but because there was a Broch at the summit. It wasn't far away from home and as it looked as though there was going to be a short respite from the showery weather for an hour or two this afternoon I decided to give it a go. The hill is just north of the village of Torwood which is near Larbert and there was plenty of parking at the start of a track that passed the side of the hill. A couple of hundred metres along the track I took to a path that wended its way up through some not very dense forestry at the top of which was the remains of the Broch.
I had no idea that there was such a thing in central Scotland. There isn't a great deal left of this one and in retrospect it would have been better to have held off visiting until the winter when the vegetation would have died down (the floor was covered in thick fern) and I would have seen a bit more. Although much diminished in height, you still get a good impression of the massively thick walls, nearly 7m at the site of the entrance passage apparently. Remnants of both the outer and inner wall remain and there were a couple of lintels still in place. There was also part of a stairway between the walls which today simply brings you out onto the top of the mound which surrounds the Broch. It is of course not nearly as impressive as the Brochs in Glenelg or at Mousa in Shetland but worth seeing nonetheless. Its a shame that its not looked after. Here are a few photos..... 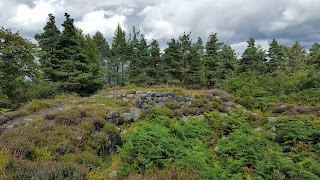 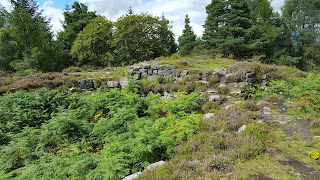 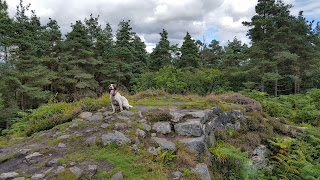 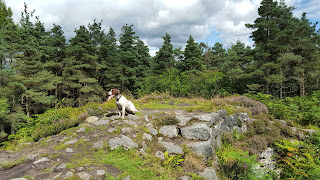 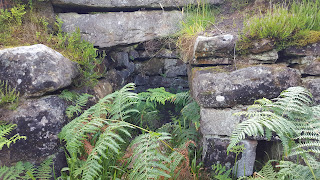 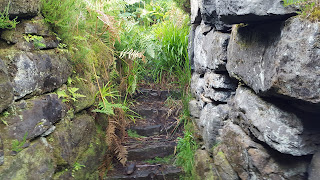 Oh, and the highest point of the hill seems to be somewhere at the base of the mound on which the Broch sits.

There were a number of paths through the wood so I carried on down the other side of the hill with occasional views west; I think that this is looking towards the distant Carron Valley reservoir..... 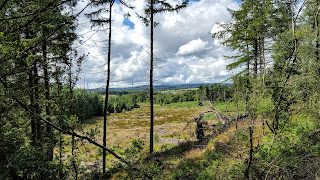 At the foot of the hill are the remains of Torwood Castle..... 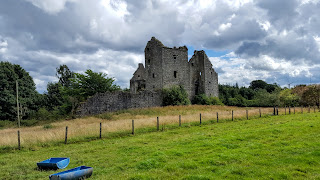 The castle seems to have been built around the middle of the 16th century. Like every other castle, it changed hands a number of times over the years with owners including the first Lord Forrester, the Dundas family (who were responsible for excavating the Broch in 1864), Joseph Bolton who was an MP for Stirlingshire in the late 1800's and a Glasgow accountant, Gordon Millar. Sadly it is now in a very ruinous state.
Posted by Neil at Monday, July 31, 2017

One of the areas of Scotland few tourists ever reach. I've not done a hill for a while now, mainly due to the woeful weather.