Participants: Just me on the hill because there were lots of sheep in field. Ben had a snooze while I went to the "top".
Where: Lamberton Hill, 217m, Sub-2k Marilyn, Map OS 67, GF 945588
Lamberton Hill is a fairly recent addition to the Marilyn list following a re-survey. Actually, "hill" is a bit of a misnomer, Lamberton upland field would be a better description. Nevertheless, it is on the list and gets a tick the same as any other Marilyn. It is only just in Scotland being just a few miles north of Berwick.
I drove through the lovely old village of Ayton and along a narrow country road. There was plenty of verge parking and from the churned up mud it was obvious that a lot of Marilyn baggers had been visiting. Parking place..... 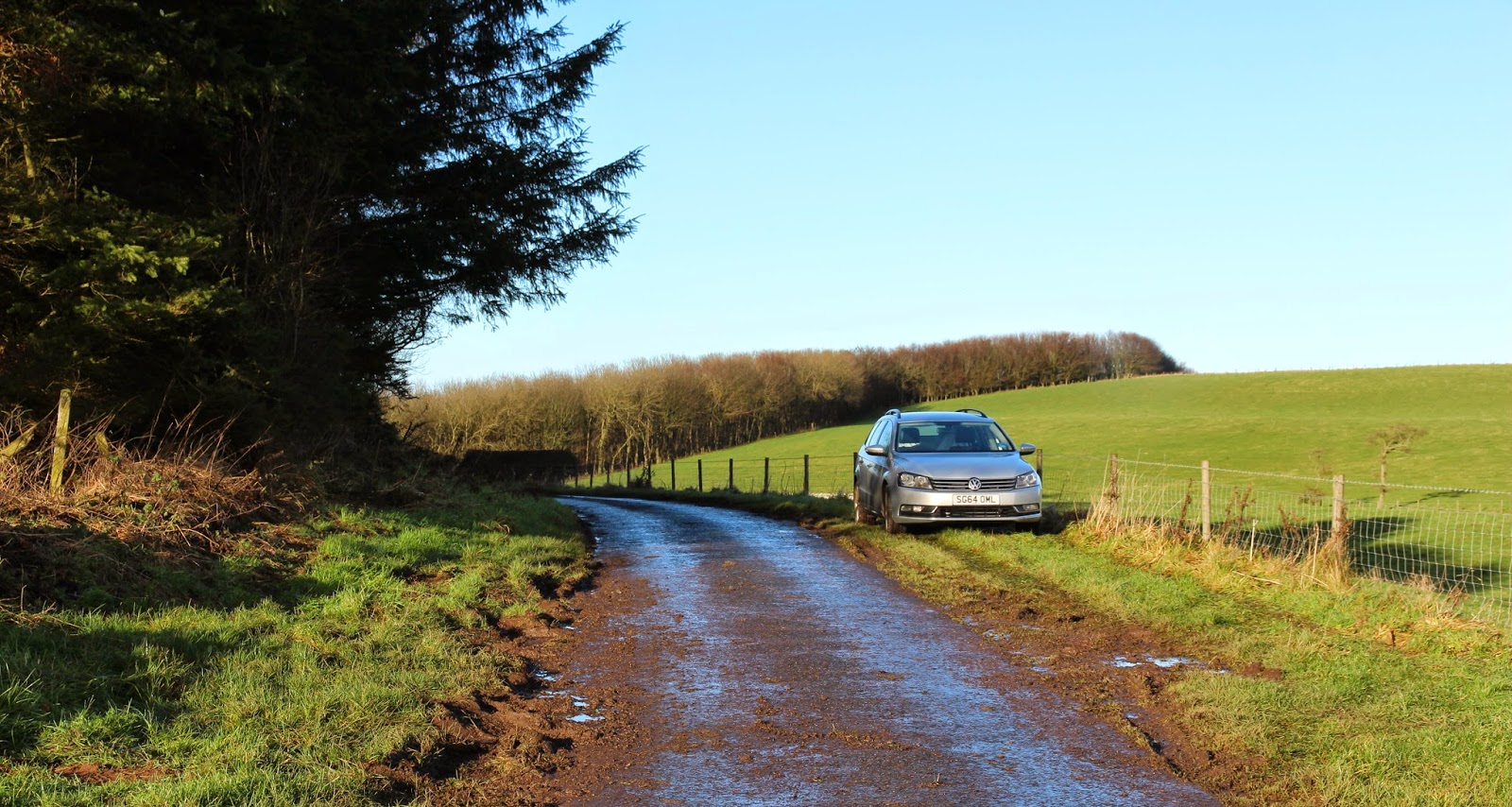 I walked about 200 yards further along the road to a gate which enabled me to enter the field without having to cross any barbed wire or electric fences. I had read that there were usually cows in the field but today they had been moved to another field and there was only a flock of sheep present. It was only a 5 minute walk from the gate to the highest point, which was unmarked. It lay just south of the remains of Habchester Fort, an iron age fort of which half of the ramparts and ditches are still obvious. Apparently, the area containing the fort is divided between two farms; one farm has left the remains in place whereas the other cultivated its section over. This is looking up to the remains of the fort from the road..... 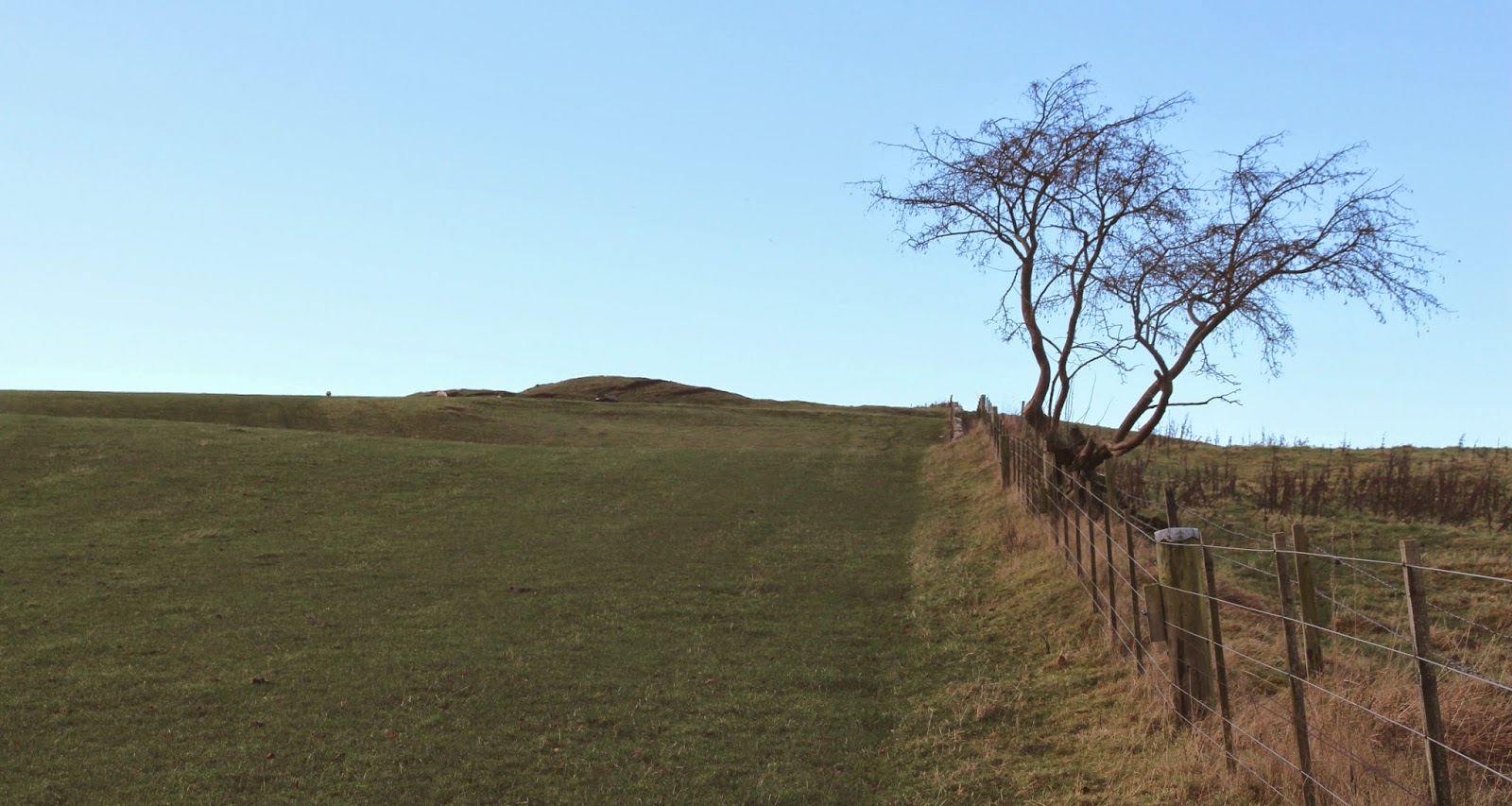 There was not too bad a view considering. These photos are taken from the spot in the field which looked as though it was the summit. This is looking north-east..... 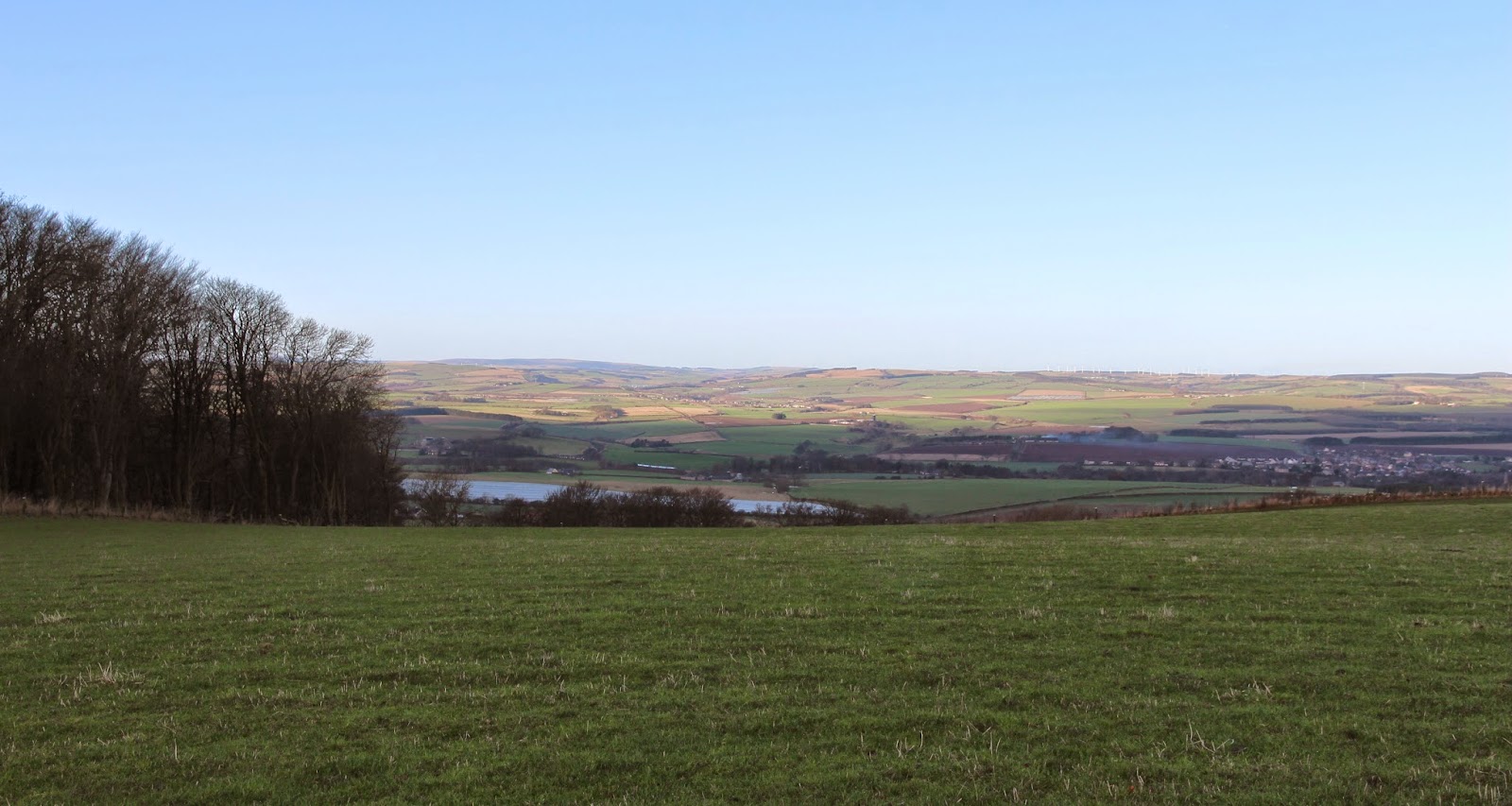 this is to the lower west top which has a trig..... 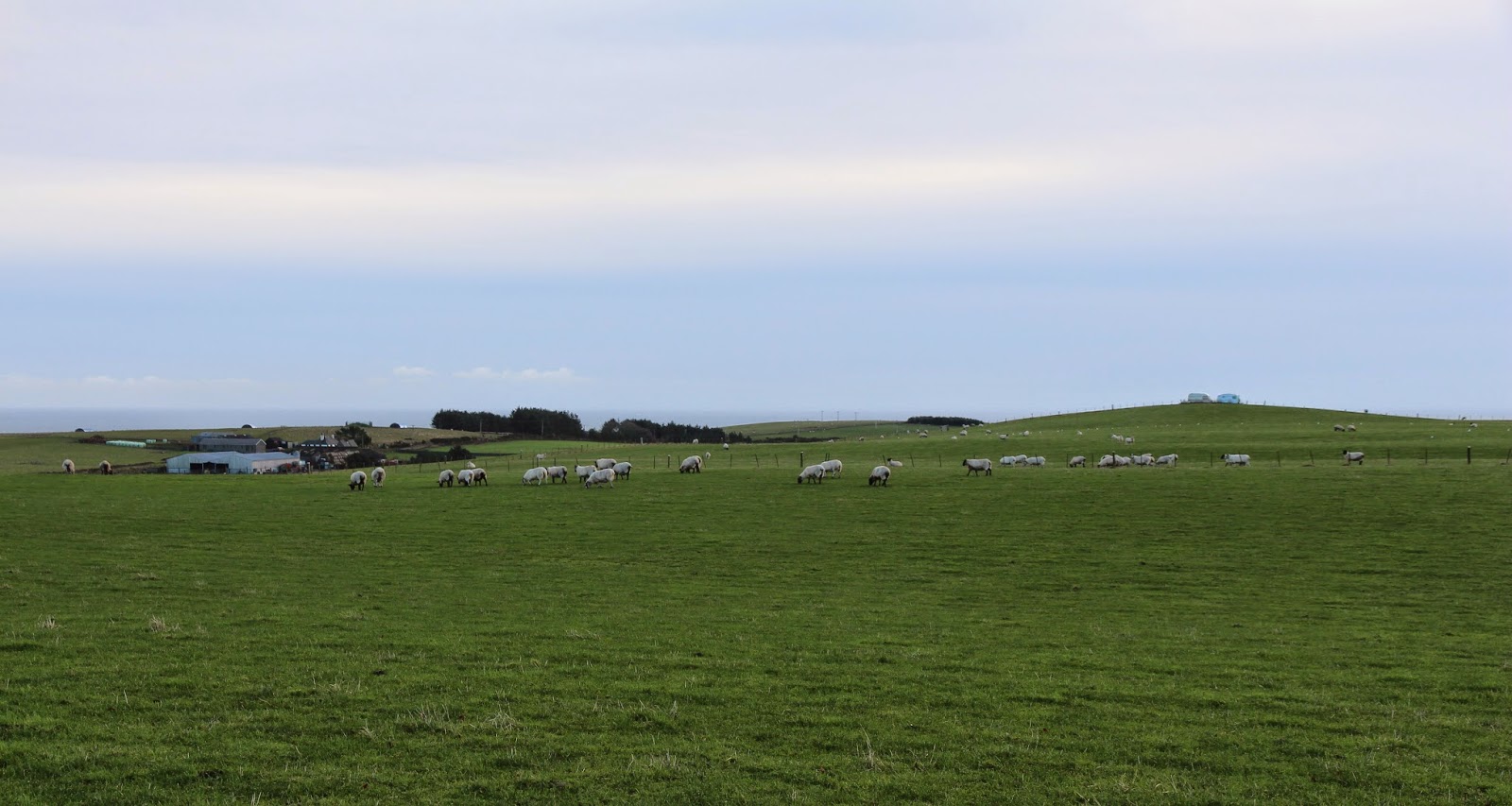 and this is looking to the Cheviot..... 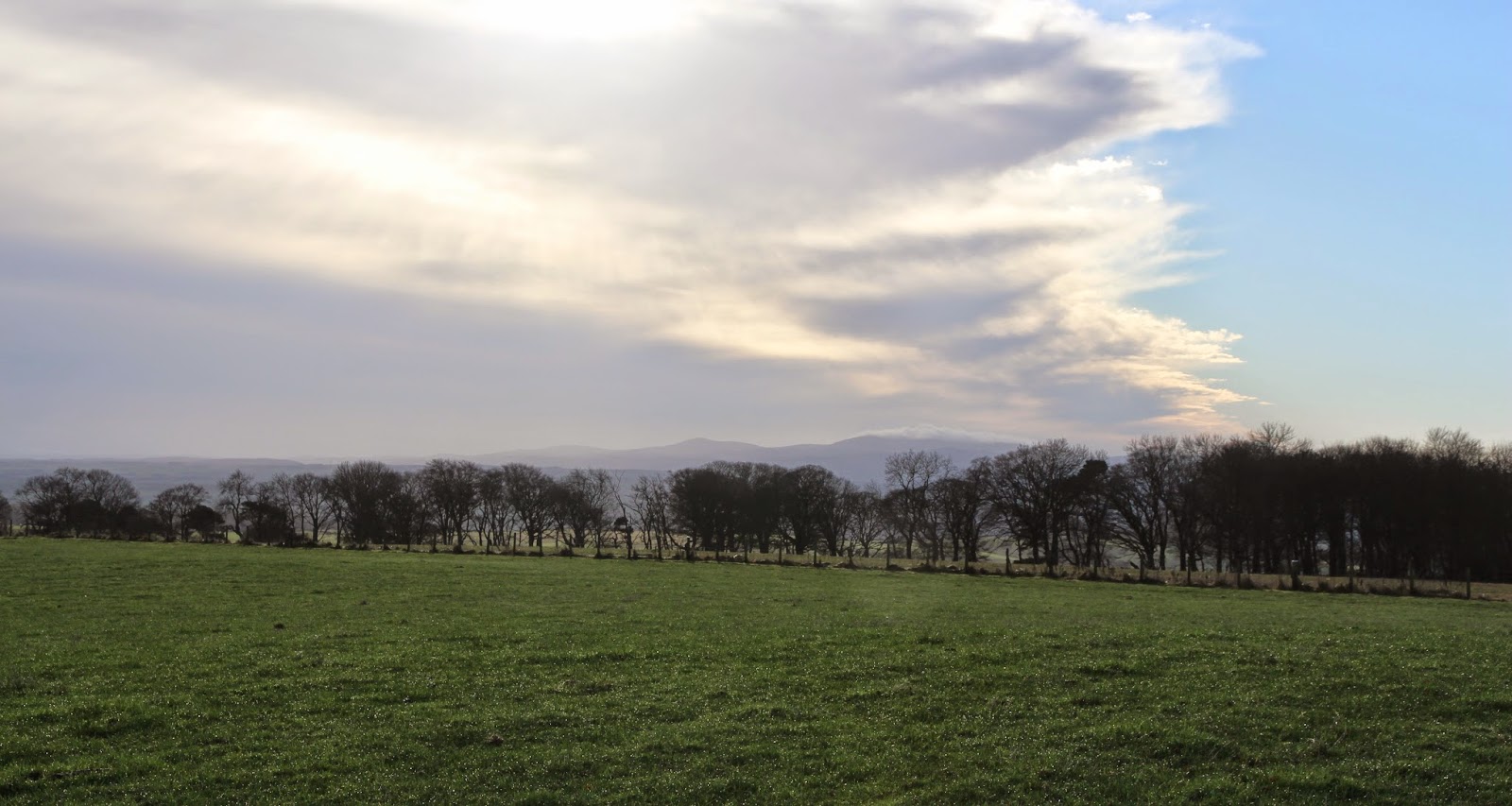 I then went to St Abbs and walked along the cliff path as far as the lighthouse and back to the car park by a minor road. Here are some pictures of the cliffs; it was a lovely day and the views were great..... 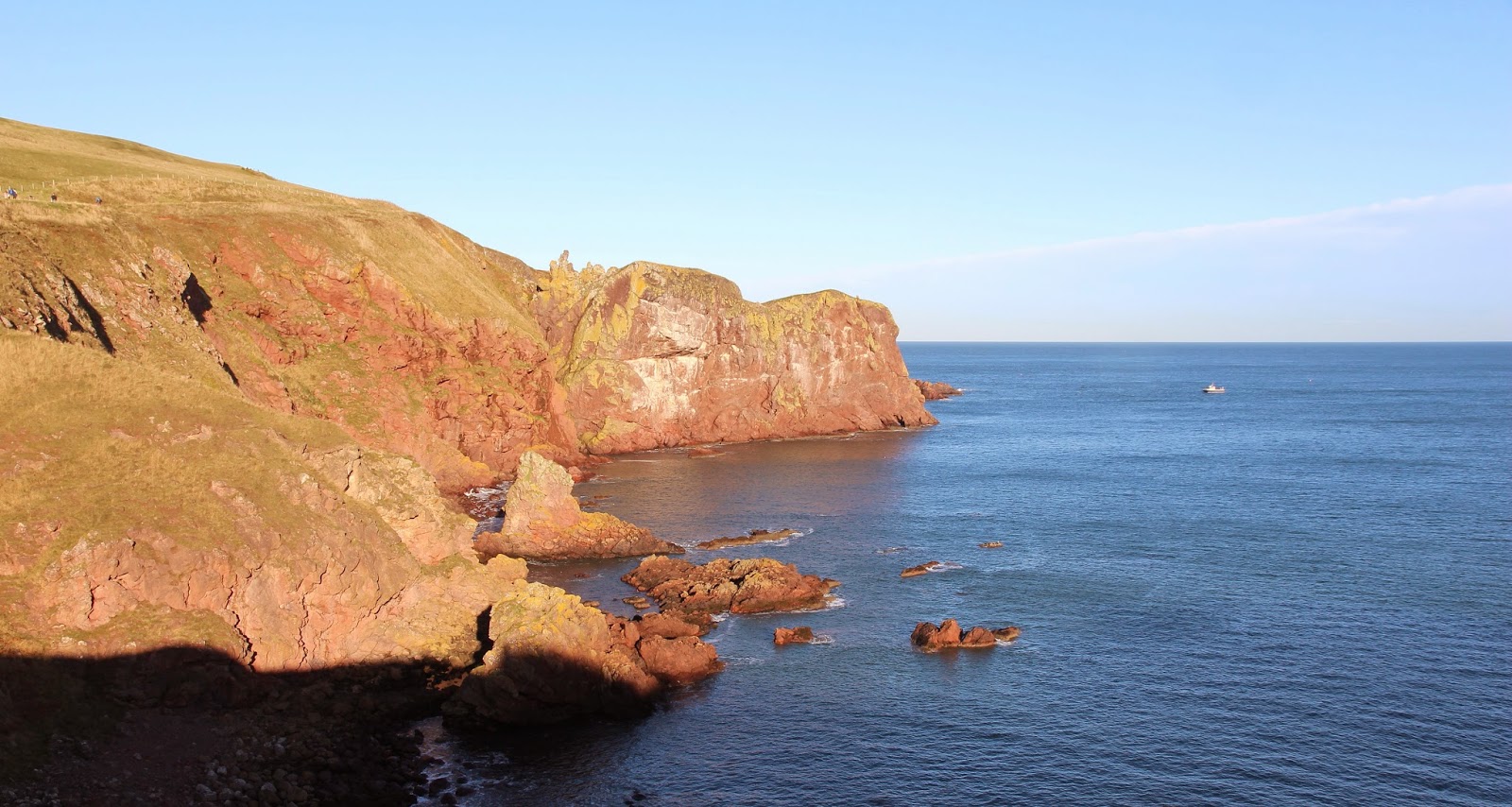 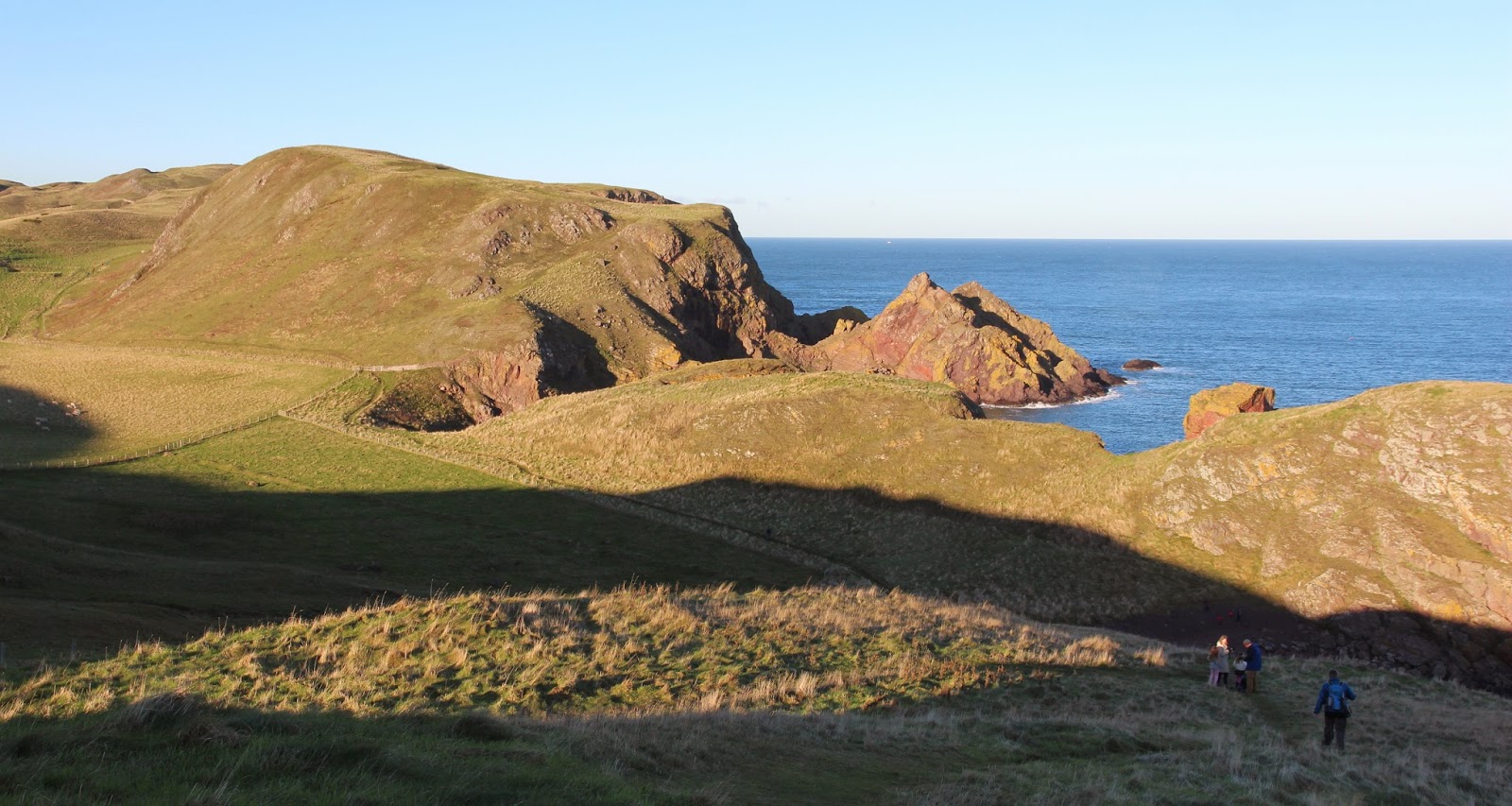 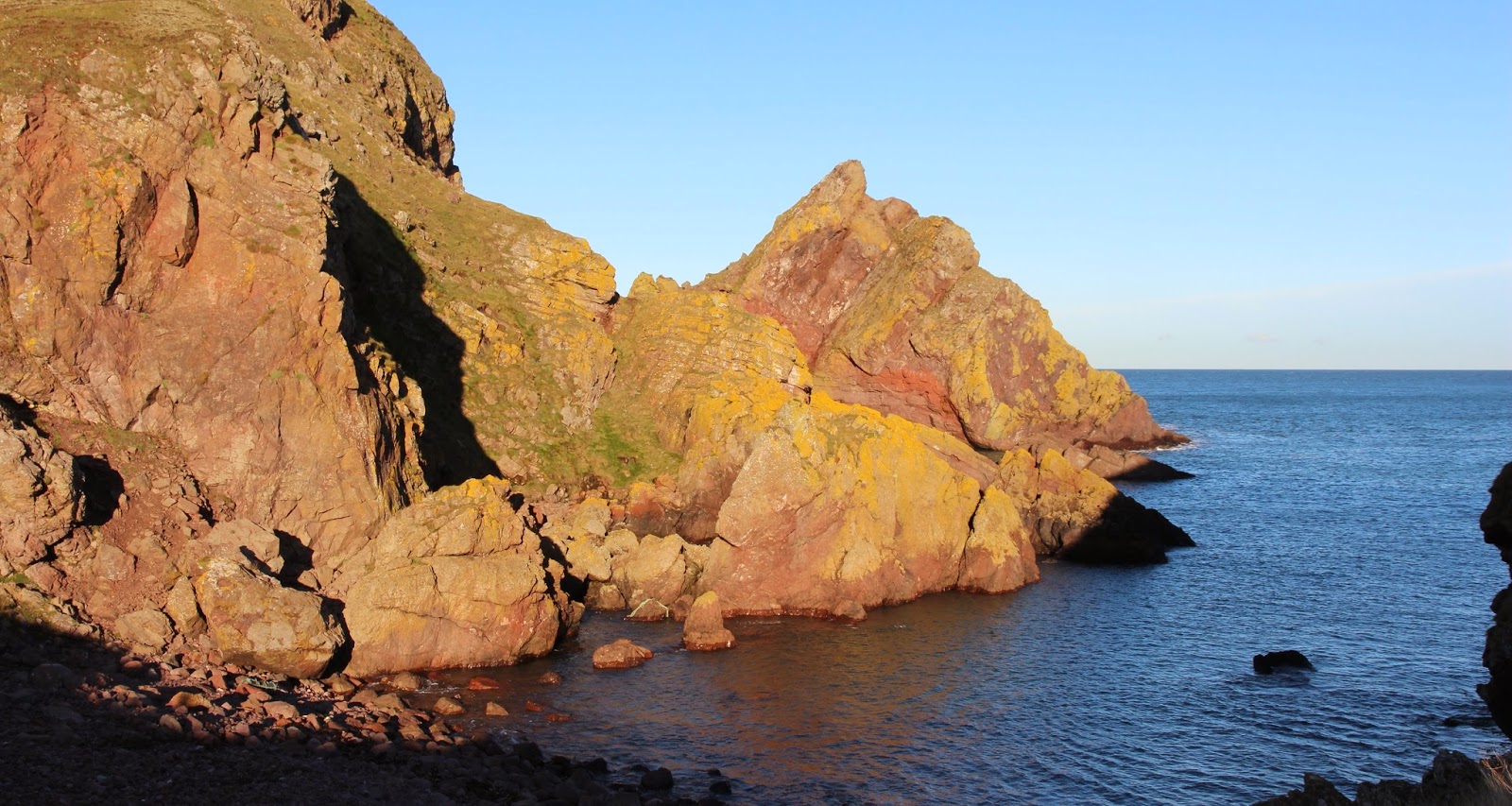 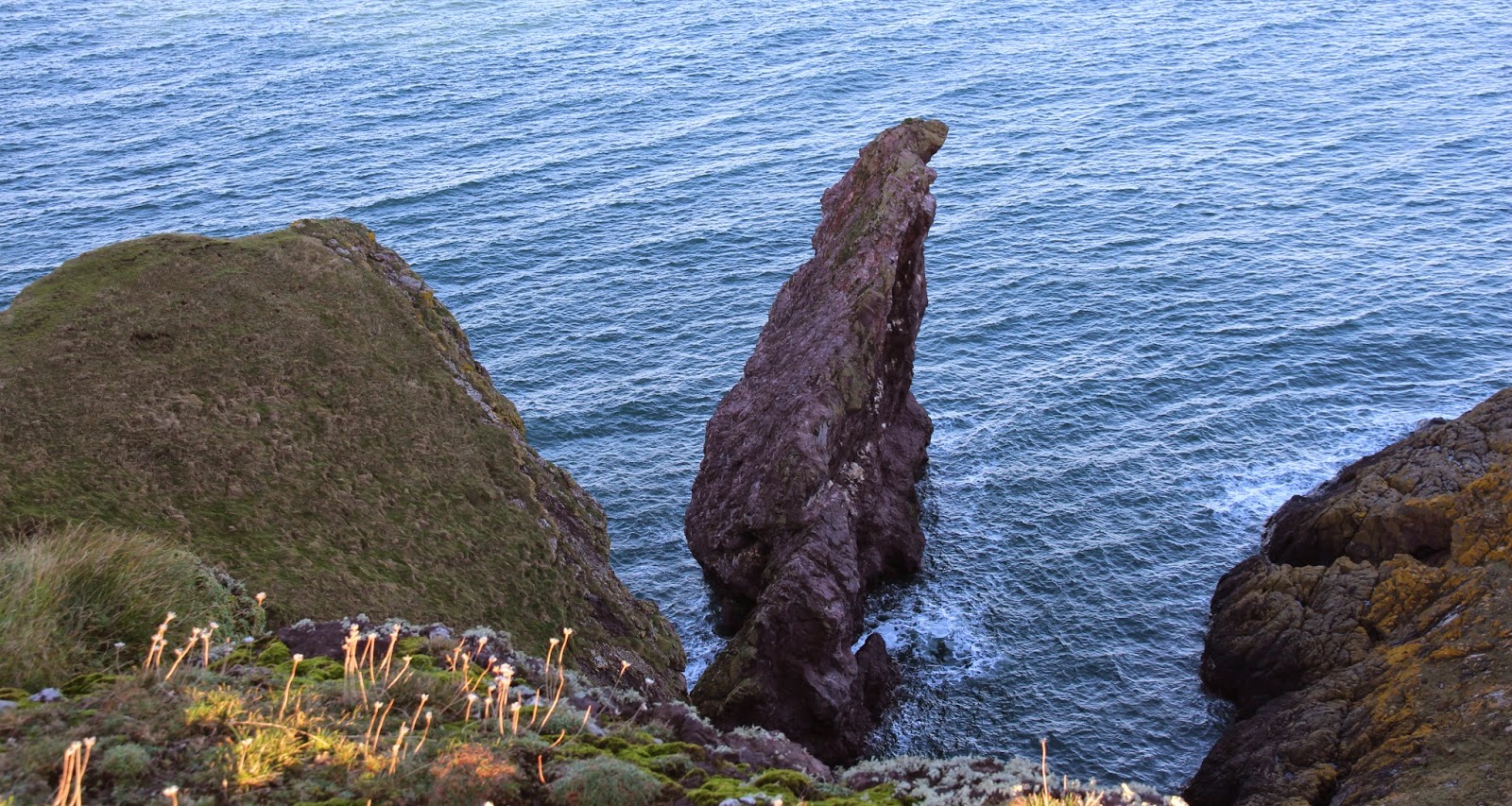 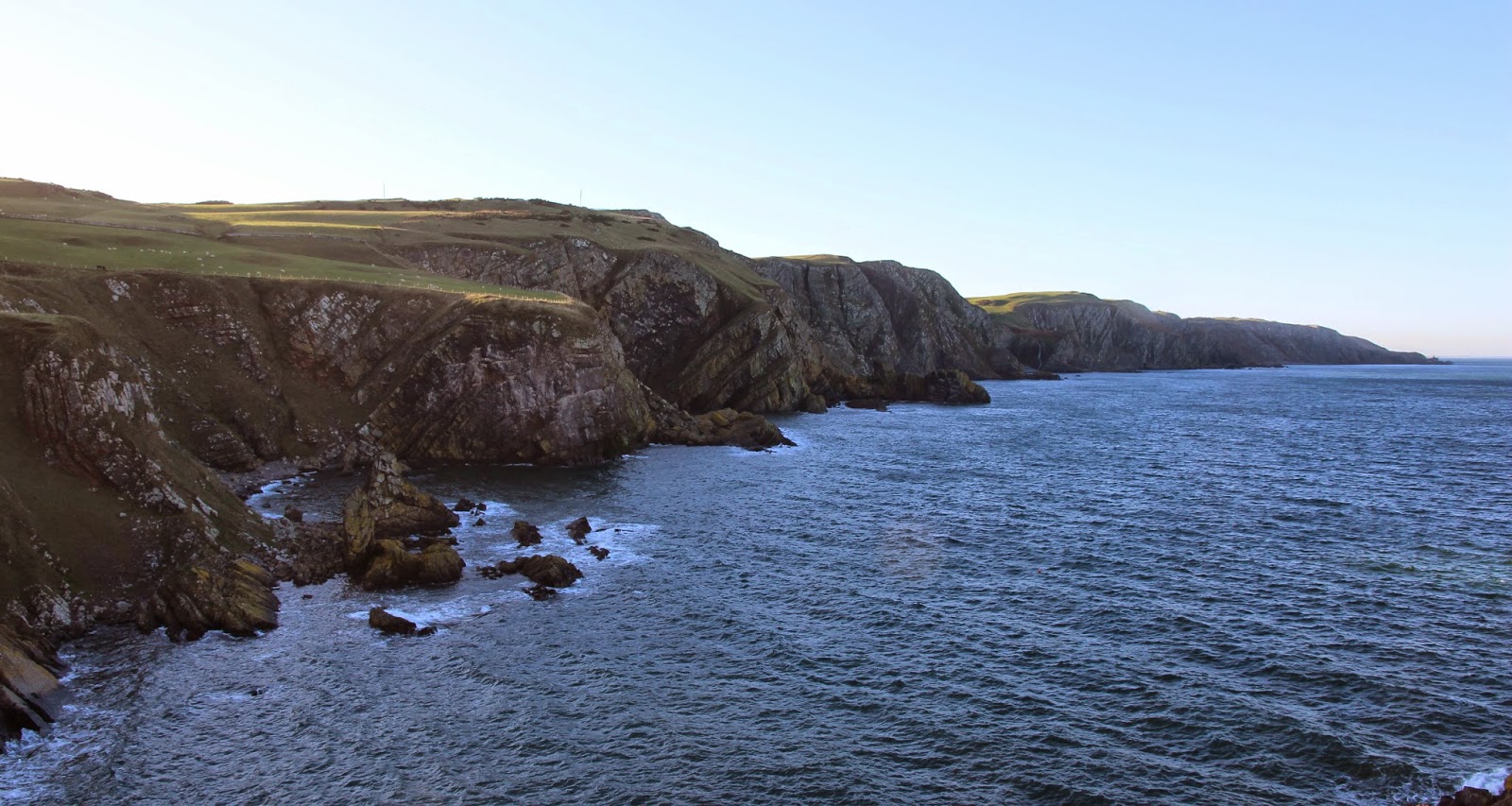 An introduction to the SIBs: Great Cumbrae and Barbay Hill

Participants: Neil and Ben
Where: Island of Great Cumbrae

There seem to be lists of everything nowadays. And here's a new one, courtesy of the folk who brought us Marilyns, Humps, Tumps etc., etc., etc. SIBs- Significant Islands of Britain which, just to make it more complicated, have been sub-divided into different classes according to prominence and land area. So there are lots to choose from. I like islands and don't really need an excuse to visit them but I shall use this list to find new, interesting, places that might be worth a visit. And as a hill bagger, I will of course have to visit the highest point in each!

A ridge of high pressure had arrived sweeping the clouds away so I decided to "officially" do my first SIB, although I had been to Cumbrae many times before. It is a small island in the Firth of Clyde, 4 miles long by 2 miles wide, reached by a 10 minute ferry trip from Largs. This is the view from Largs, the ferry the Loch Shira, and the approach to Cumbrae slip..... 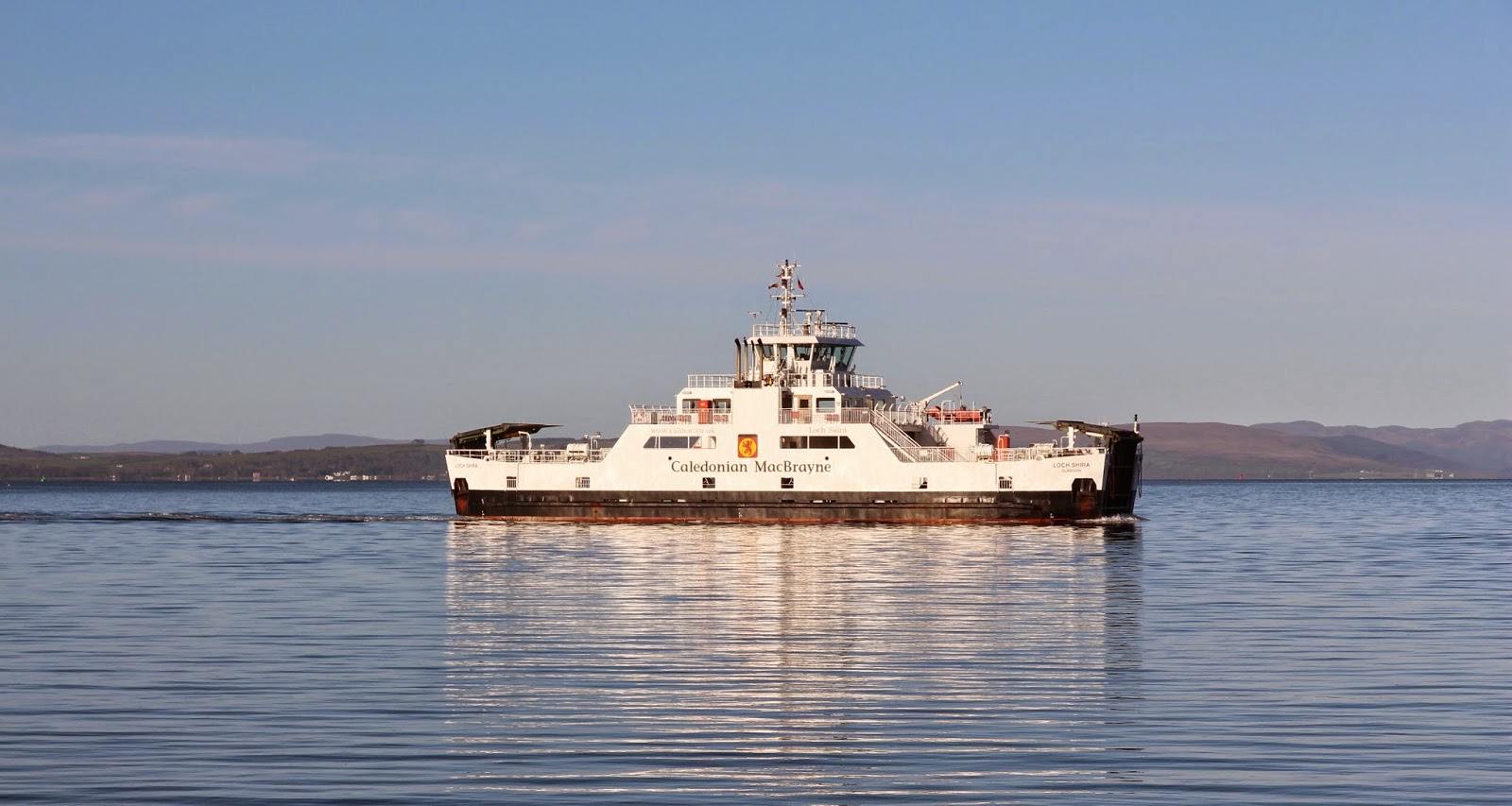 I always feel like I've been transported to another world when I come to Cumbrae, only a couple of miles from industrial Ayrshire yet everything seems much slower and more peaceful. A road runs round the island, it's almost completely flat so great for cycling or else a gentle wander. I've done both. There is also a regular bus service from the slip to Millport so I usually just walk round the west half of the island nowadays and get the bus the rest of the way! The first point of interest is just north of the slip- a memorial to two young sailors from HMS Shearwater who were drowned here in 1844..... 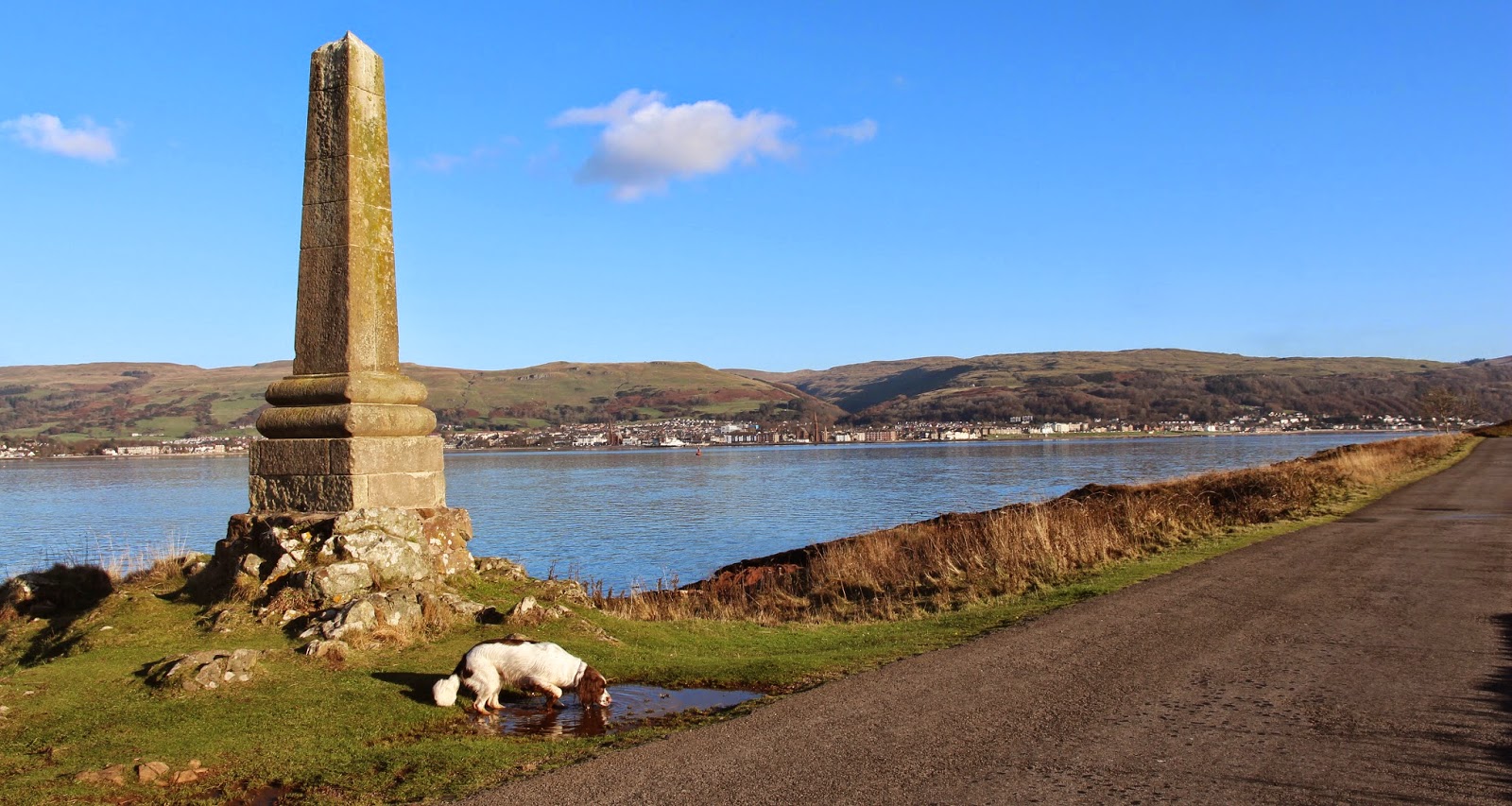 The inscription on it is getting a bit faded but reads:

IN MEMORY OF MR. CHARLES D. CAYLEY
AGED 17 YEARS
AND
MR. WILLIAM N. JEWELL
AGED 19 YEARS
MIDSHIPMEN OF
H.M.S. SHEARWATER
TWO PROMISING YOUNG
OFFICERS DROWNED BY
THE UPSETTING OF THEIR
BOAT NEAR THIS PLACE
17TH MAY 1844
THIS MONUMENT IS
ERECTED
IN TOKEN OF THEIR WORTH
BY
CAPTAIN ROBINSON
AND
OFFICERS
OF THE ABOVE VESSEL

While the road on the east side of the island looks to the industrial area of Hunterston and its ore terminal, that on the west side is completely highland in character. The views are across the tip of Bute to the hills of Arran and they were at their best today..... 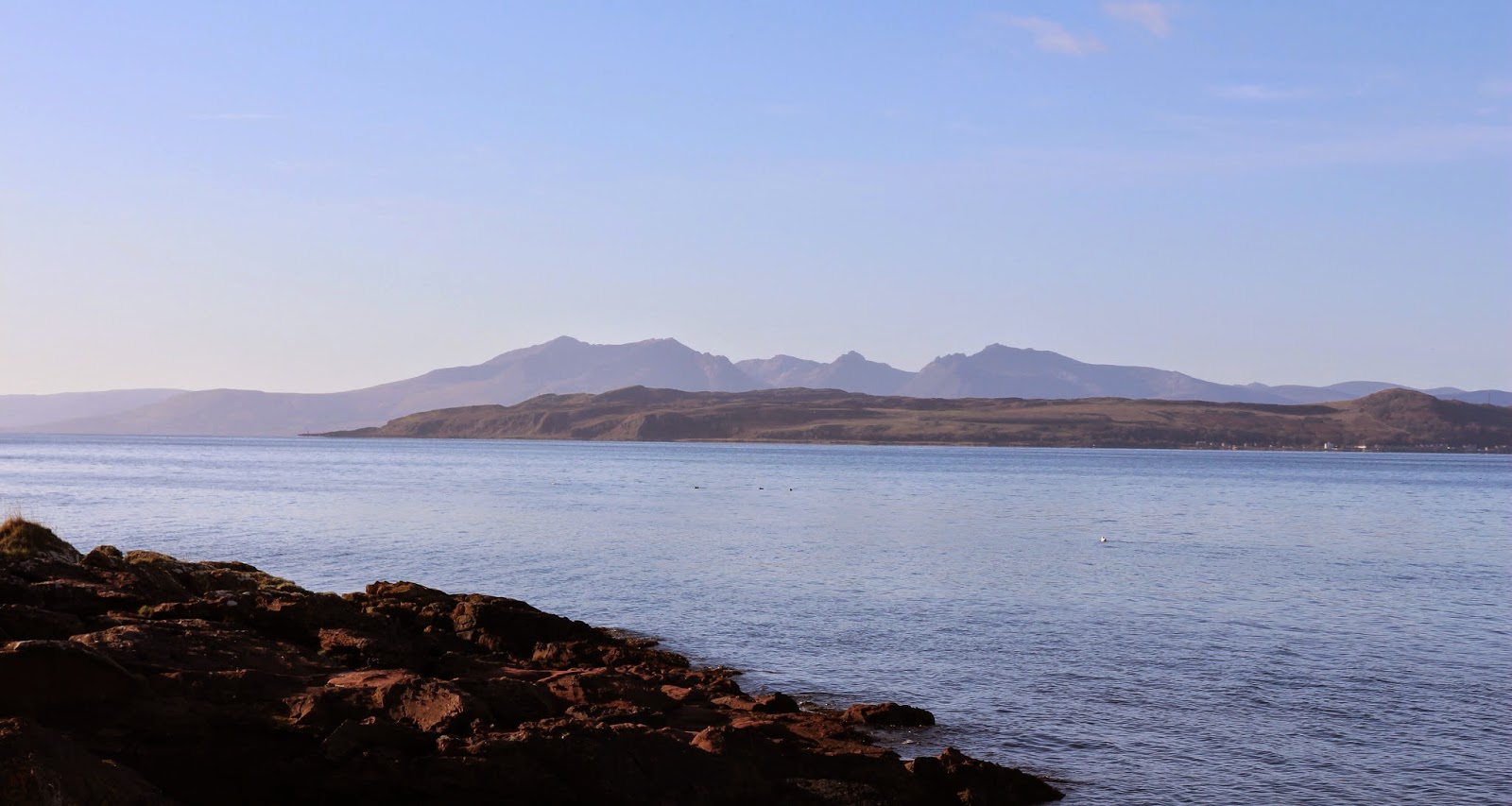 After 5 miles, we reached the only town, Millport. There were lots of properties up for sale but generally it was looking nice in the sunshine. They obviously follow the old traditions here as most of the shops were shut- Wednesday afternoon closing! There is a nice wee harbour and there are usually a few yachts in the bay in summer, not today though. Here are a few pictures of the town..... 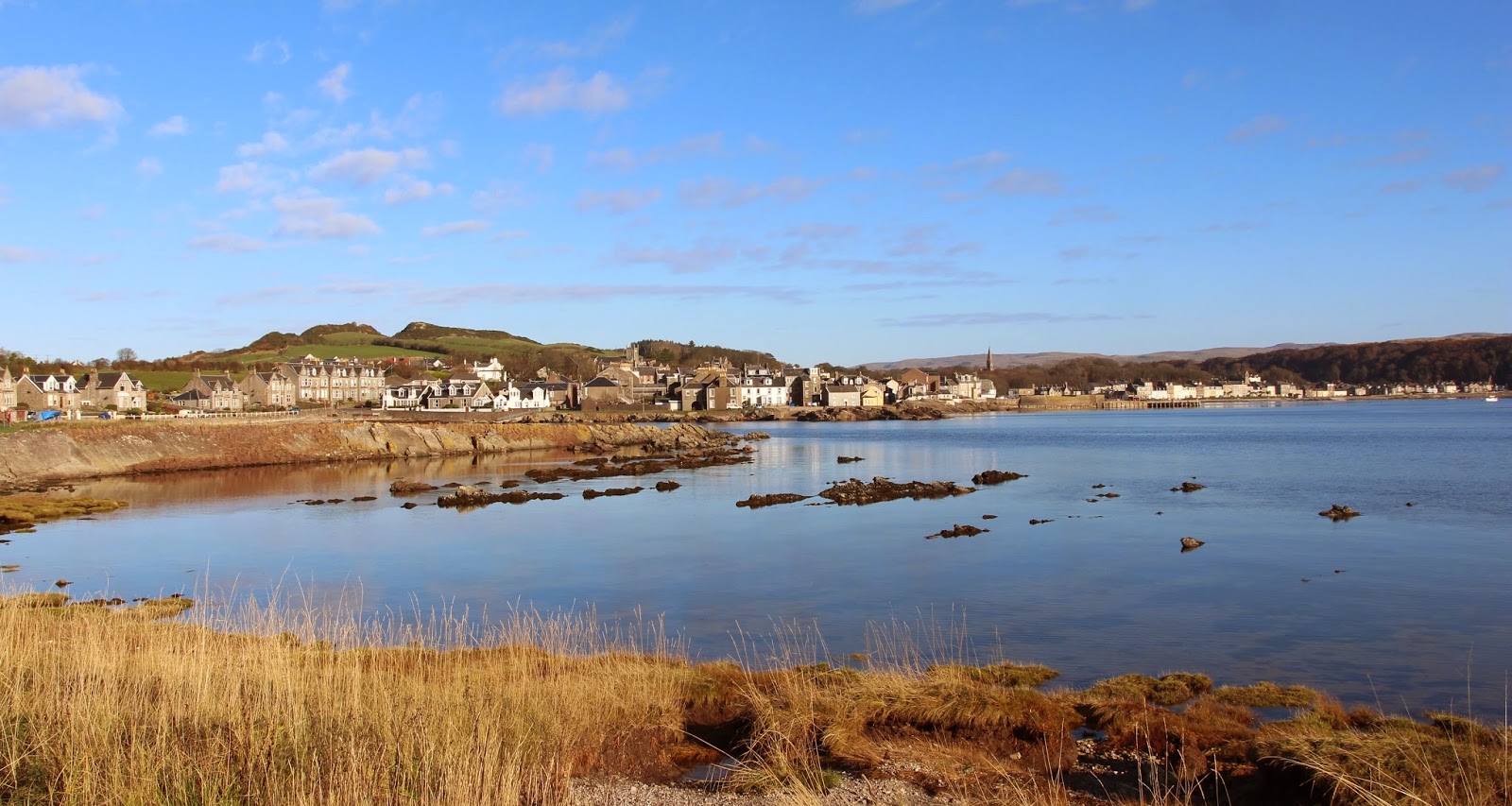 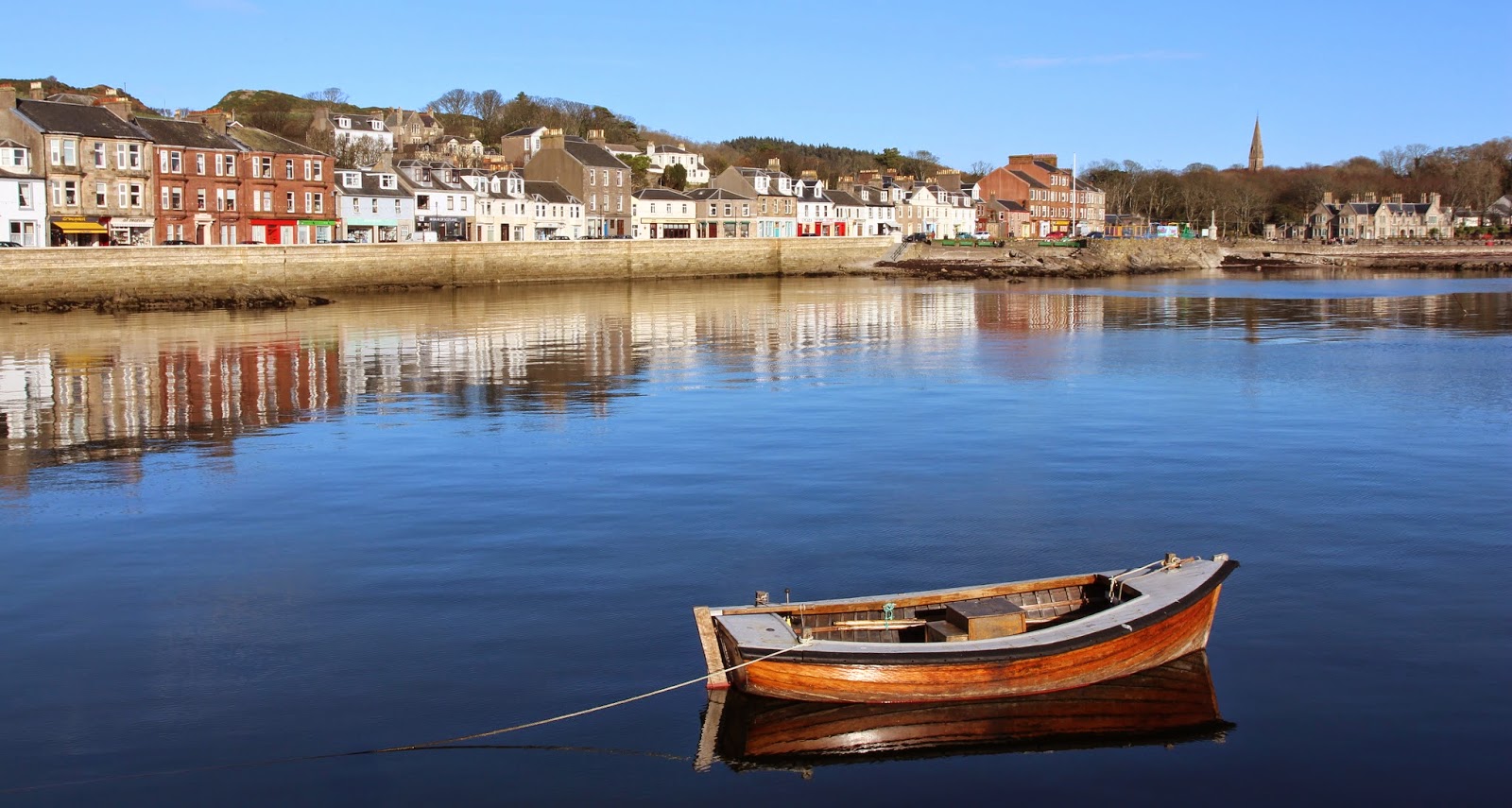 It was warm in the sun so I found a seat and had a rest for a bit. A cup of minestrone soup from one of the cafes provided an excellent lunch.


Every view of the town features a tall spire- that of the Cathedral of the Isles- so I had to go and have a look. It is known for being Britain's smallest cathedral and dates from 1851. The information says "It was built on ground owned by the Boyle family and it's founder, George Frederick Boyle, later became 6th Earl of Glasgow. It is one of a group of buildings comprising two residential buildings (colleges) and a collegiate church designed by William Butterfield. Planned as a theological college for the Scottish Episcopal church, in its early days it was seen as the "new" Iona and in 1876 it was consecrated Cathedral of the Isles". It is certainly a striking building..... 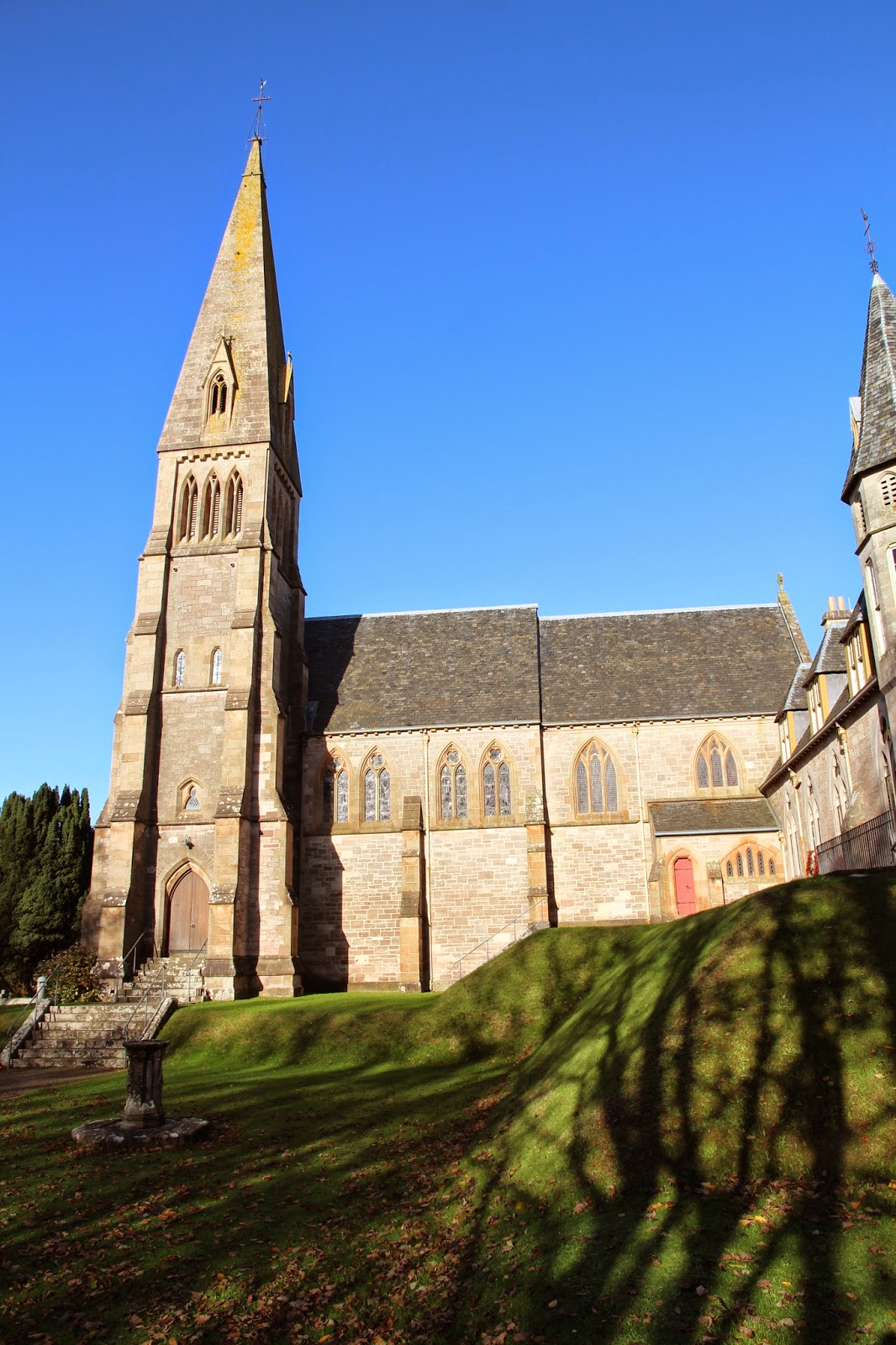 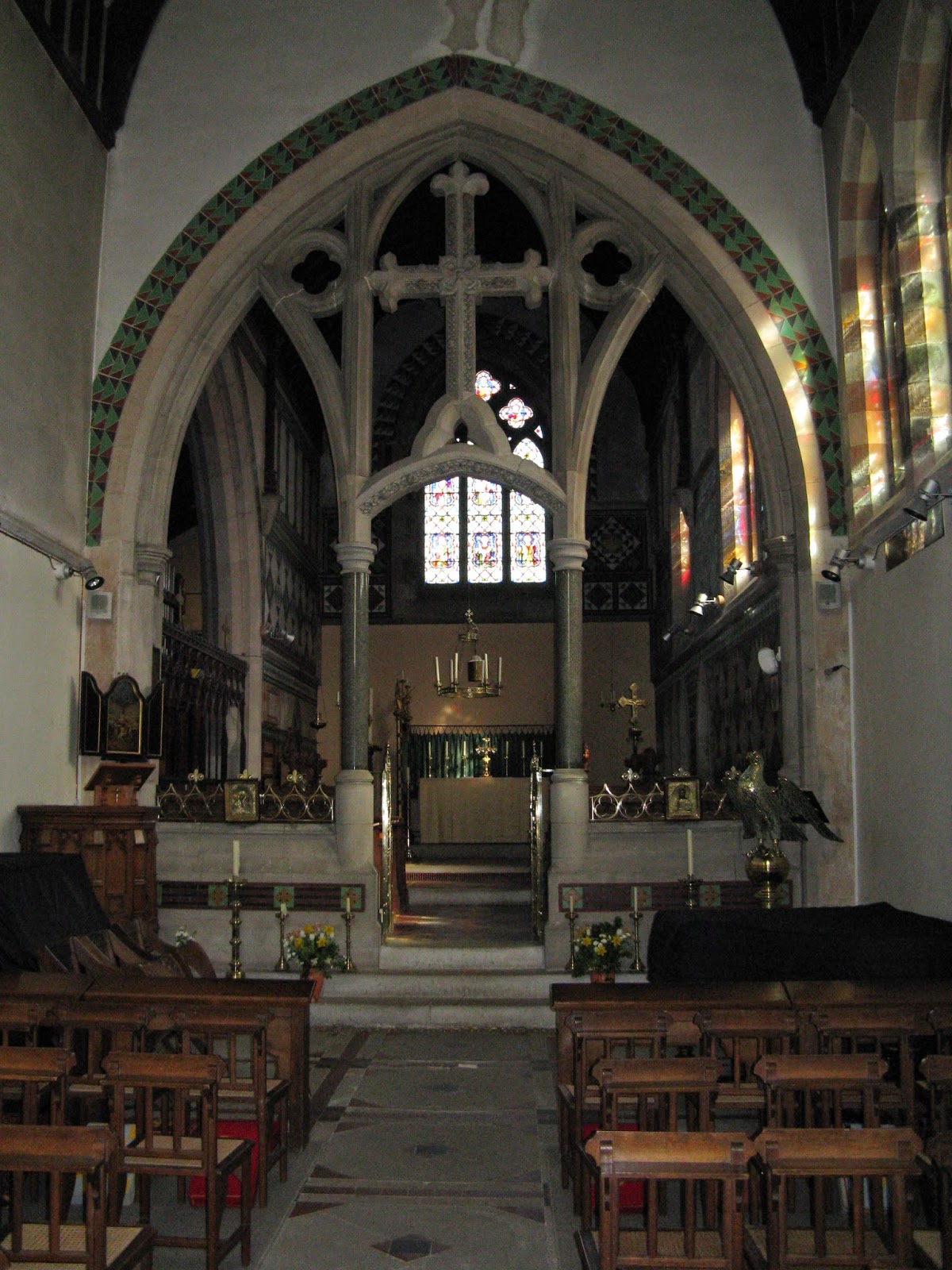 Another road leads from Millport over the top of Barbay Hill, the highest point on the island, and down to the ferry slip. Barbay Hill is 127m/417' and has a trig, a couple of seats, a telephone mast (I think that's what it's for) and a parking place a few yards from the top. So not the most difficult of hills! And it is also a great viewpoint. The highest point seems to be a sandstone rock west of the trig..... 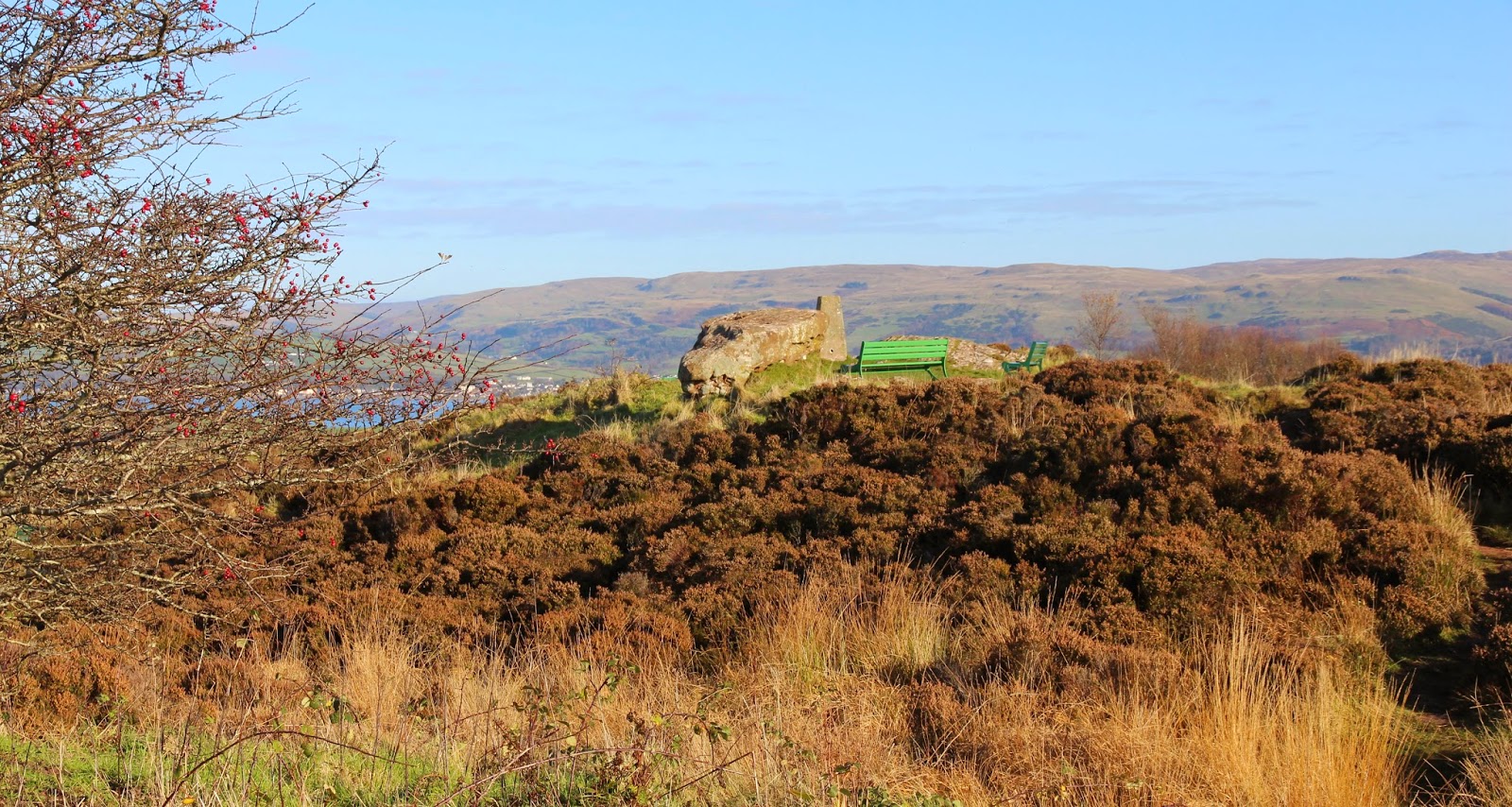 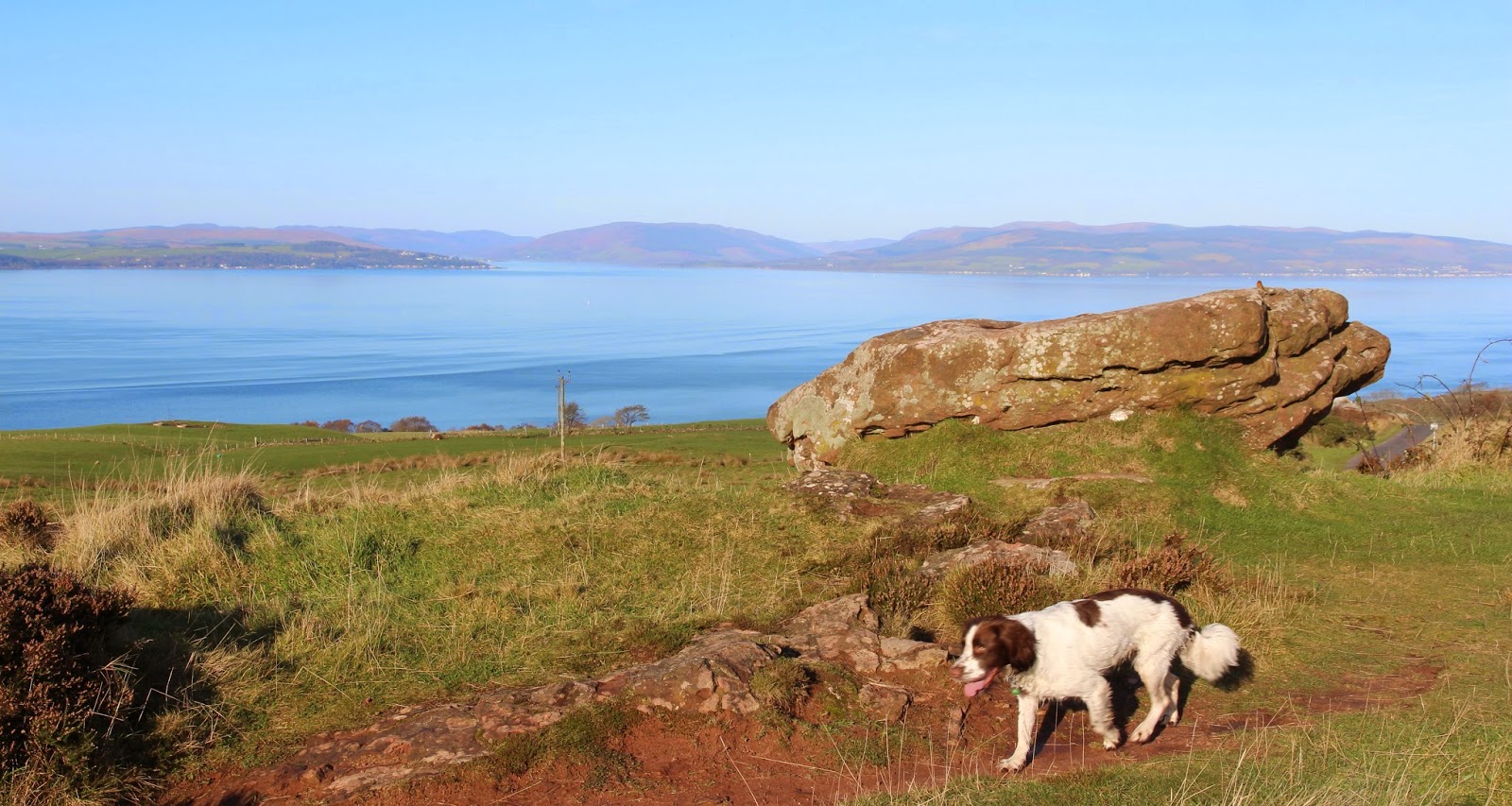 By the time we got back to the slip, the sky was starting to get grey in the west, the sign of more rain approaching. But the sun was still shining over Largs..... 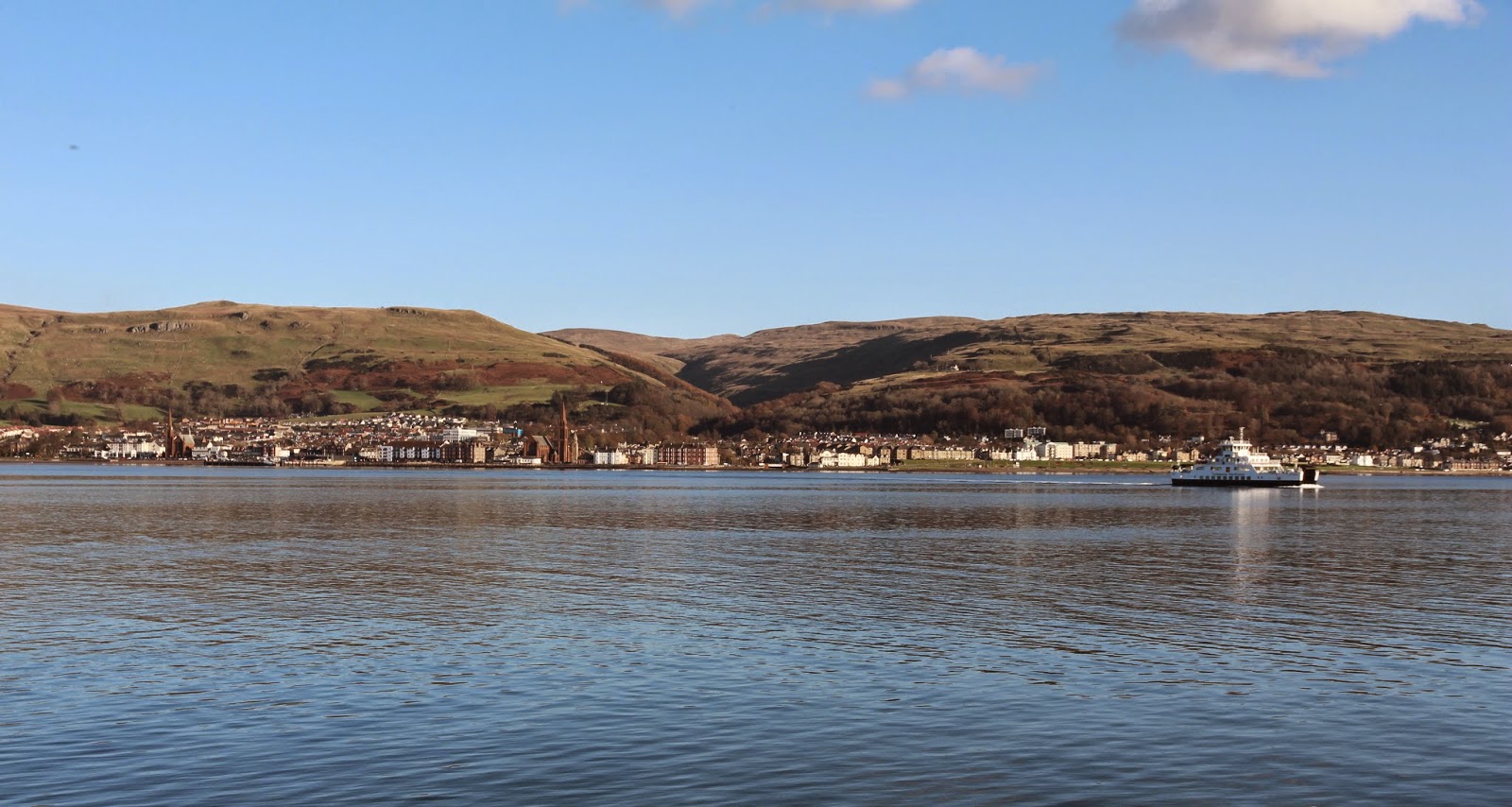 and very soon, the Loch Shira was approaching the pier..... 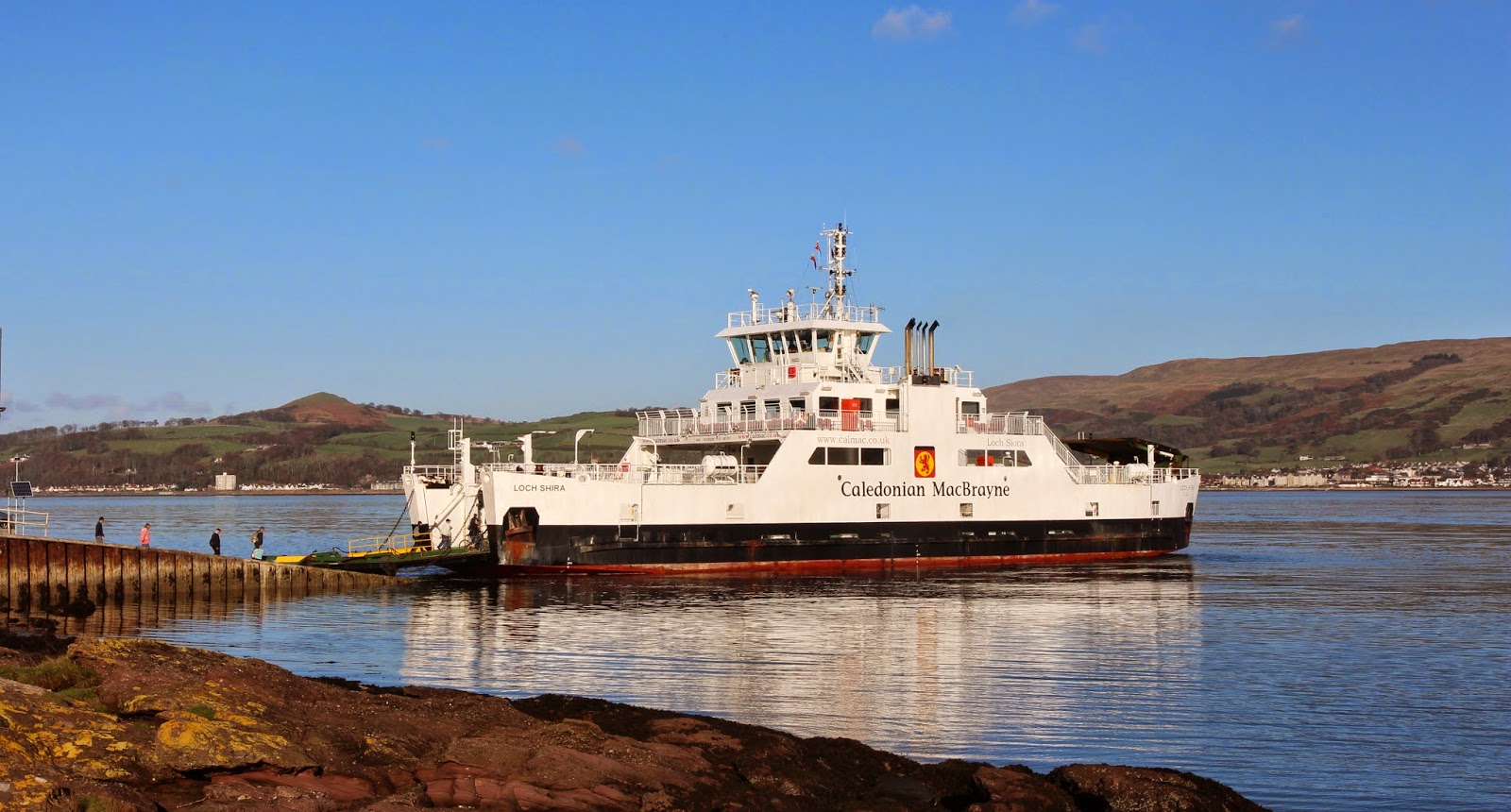